Today's Answers come from Jennifer Estep, the author behind the Elemental Assassin series. I happened upon Estep's work while looking through Amazon's recommended reads for me. Boy, am I glad the algorithm was working that day. I'm a big fan of Gin Blanco, assassin for hire.

WN: Ashland is a tough place to live. The upper class regularly hires assassins to take out their enemies. And Gin is one of the best. Tell us more about what drives Ashland and those that live there.

JE: Well, like you said, Ashland is definitely a dark, gritty, c 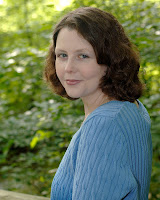 orrupt, Southern city. It’s every man and woman for themselves in Ashland, and since the cops are so corrupt and crooked, the only justice that people get is what they make for themselves – with whatever weapon happens to be handy. LOL.

When I decided to write an assassin character, I wanted to put her in a world that would justify some of her actions. That’s why I made Ashland such a dangerous, volatile place. In Ashland, the rich scheme to get richer and bring down their enemies, while the middle- and lower-class folks are just trying to survive – something that Gin helps them with from time to time by doing her own brand of “pro-bono” work.

WN: Gin Blanco has a bit of Robin Hood in her; she takes the time and effort to help others, especially the down trodden. It is something that her mentor, Fletcher Lane, did as well. How does this fit into their lives and after hours work.

JE: Even though she’s spent most of her adult life being an assassin, Gin hates bullies more than anything else. So when she sees that someone – a good, innocent person – is being bullied or threatened, she finds herself stepping in to help them, even if it puts her in danger.

Also, family is very important to Gin since her mother and older sister were murdered, so when someone’s family is also threatened, well, that really pushes Gin’s buttons and makes her even more determined to protect and help them – no matter what.

I think it’s also a little bit of atonement as well, a way to balance out some of the bad things that Gin’s had to do herself over the years.

WN: Gin's love life - it's the one place she isn't in charge. Tell us more about the men she is (or isn't) attracted to.

JE: Well, in Spider’s Bite and Web of Lies, Gin’s love interest was Donovan Caine, a real straight-arrow detective. But at the end of Web of Lies, Donovan decided that he just couldn’t come to terms with Gin being an assassin and he left Ashland.

Lucky for Gin, sexy businessman Owen Grayson was more than happy to step up in Venom and let Gin know that he had no problems with her being an assassin, since he’s done some of the same bad things that she has over the years to keep his younger sister safe. Gin likes Owen, but she’s struggling to figure out how she feels about him … something that’s a big part of Tangled Threads, the fourth book in the series.


WN: Family is incredibly important to Gin, especially since she lost her own at such a young age. Any hints for the readers as to what's in store?

JE: Well, I can’t give out too many spoilers, but I’ll say that there’s a lot of emotion and interaction between Gin and her long-lost sister Bria in Tangled Threads. Their relationship is one of the things that drives the book, as well as Spider’s Revenge, the fifth book in the series.


WN: Let's shift gears a bit here, from your Elemental series to your writing life. What motivates you to write stories like Gin's or Gwen Frost from the Mythos academy?

JE: I love reading books that have a little bit of everything in them – magic, action, danger, romance, drama – and those are the kinds of books that I like writing too. I write books so I can tell the stories that I want to tell. It sounds a little crazy, saying that I listen to characters’ voices in my head, but that’s what happens sometimes.

So far, I’ve just been really lucky that readers have enjoyed Gin and all her crazy adventures. It’s really humbling to know that people read and enjoy my work, and I always try to make each book better than the last.

WN: Every writer has a method that gets them to the final draft. What's your writing process like?

JE: I’m a total punster. LOL. I don’t do character outlines or storyboards or things like that. I usually just think about my heroine, her magic, the key turning points of the story, and then I sit down and start writing.

Then, I’ll start on my second draft, where I really polish everything up and fill in all the gaps. Then, I’ll set that draft aside for a few weeks before going back to it, reading through, and making corrections, etc. I usually repeat this process three or four times until I have a finished book (90,000 words-plus) that’s as good as I can make it.

It’s not pretty, but it’s the system that works for me – so far, anyway.

WN: Anything else I should ask, but haven't?

JE: I’d just say that folks should be on the lookout for several books from me this year. Tangled Threads, the fourth book in my Elemental Assassin urban fantasy series, will published on April 26, while Spider’s Revenge, the fifth book, will be released in October.

I also write the Mythos Academy young adult urban fantasy series. The books focus on Gwen Frost, a 17-year-old Gypsy girl who has the gift of psychometry, or the ability to know an object’s history just by touching it. After a serious freak-out with her magic, Gwen is shipped off to Mythos Academy, a school for the descendants of ancient warriors like Spartans, Valkyries, Amazons, and more.

Thanks so much for the Answers, Jennifer!
Posted by Stacie Penney at 6:18 AM