June ended a while ago, but Word Nerd finally crunched her bibliometer numbers for the month.

This is three books fewer that 2008 at the same time, but she's guessing at some point, she'll make that up.
Posted by Bethany K. Warner at 11:10 AM No comments:

NPR has compiled a list of the 100 best beach reads. This was quite the process with editors and reviewers first culling a HUGE list down and then putting out the top 200 or so up for a vote to their listeners/website users. Everybody got 10 votes in the poll (Word Nerd voted) and she thinks the results are interesting.

Word Nerd is sort of surprised to see the Harry Potter books as the top beach read and wonders if that pick was influenced at all by the release of the new movie. (Like say, had the list come out in May before the movie, would HP have still been number 1?)

Of the top ten, Word Nerd voted for #'s 7 and 8 (The Great Gatsby and The Hitchhiker's Guide to the Galaxy.) She doesn't think she voted for HP, but honestly, can't remember. (Voting was a few weeks ago.)

She knows she also voted for #20 -- Water for Elephants, #24 -- The World According to Garp and #28 -- The Princess Bride and is a little disappointed to see them that far down in the list. (Not to disparage Gone with the Wind at #16, but who wants to lug that tome with them to the beach...)

What do you think of the NPR listeners rankings? Are there books you would put higher? Lower? Think should be off the list altogether?
Posted by Bethany K. Warner at 8:13 AM 2 comments:

Bren Cameron, translator to the atevi aiji, is back from space and the attempted coup is over. But, internal shufflings at the legislative apartments means Bren is losing his home there, so he retires to his country estate. However, the aiji's precocious son -- Caijeiri -- sneaks away to join Bren at his coastal home. Only the politics in that region aren't as stable as they think, and Caijeiri's escapades puts them all at risk.
Banter Points: A trip back to the Foreigner universe is always welcome; even though it's an alien culture, after 10 books, it sort of feels like a home coming. Great political machinations in this one that reminded Word Nerd more of the first trilogy.
Bummer Points: Word Nerd's not thrilled with half the story being told from Caijeri's POV. Cherryh started that a few books back and it's been a change Word Nerd could have done without.
Word Nerd Recommedation: As she's said before, this is top notch sci-fi. It's not space opera and is more akin to a thoughtful political novel than sci-fi. Nevertheless, it's a must-read series for sci-fi fans.
Posted by Bethany K. Warner at 9:33 AM No comments:

Title: Naamah's Kiss
Author: Jacqueline Carey
Length: 600+
Genre: fantasy
Plot Basics: Carey returns to her alternative Europe for her latest book. This one picks up several generations after the adventures of Phedre and Imri in the Kushiel series. The story follows Moirin, a child of the Maghun Dhonn in Alba with a D'Angeline father. She's set on an adventure that takes her to Terre D'Ange and then lands beyond as she searches for her destiny, and wrestles with her dual nature of have D'Angeline passions and Maghun Dhonn magic.
Banter Points: It was fun to return to this lush world that Carey obviously has lavished much attention on in creating it. Moirin is an interesting protagonist -- very self-assured in ways that Imri wasn't. It was also nice to see Carey again push the boundaries of the known world in the books with taking Moirin to China (Ch'in) and discussing the discovery of Terra Nova.
Bummer Points: This book was really slow to get going. Word Nerd understands that it takes time to maneuver through a complexly built world (she's dealing with this in her own writing...) but, she really didn't engage with the book fully until the second half. Additionally, the romance in this book between Moirin et al. featured a lot of lesbian relationships which Word Nerd just doesn't prefer to read about. (Actually, there's a lot of straight relationships in this book too...Moirin gets around... and unlike Phedre, the sex in this book felt superfluous to the story many times.)
Word Nerd Recommendation: On the whole, not as captivating as the first six, but worth it for Carey fans. Word Nerd will definitely read the next one when it comes out.
Posted by Bethany K. Warner at 10:26 AM No comments:

Everybody needs an editor

Word Nerd isn't getting political here, but check out this story that Vanity Fair did about Sarah Palin's resignation speech.

They assembled a top-notch team of editor/proofreader types to correct the speech for publication. Look up "proofreader marks" to decipher everything they fixed.

Word Nerd's not saying her pages look like this as she's revising, but it gives you the idea. Taken to the extreme.
Posted by Bethany K. Warner at 8:03 AM No comments:

Word Nerd hasn't read any Frank McCourt herself, but they are books that are always on her reading list.

It always makes her sad to learn when authors who have been recognizable pass away.

The full story is here.
Posted by Bethany K. Warner at 9:08 AM No comments:

Labels: Memories of the Greats

Word Nerd is trying something new....

Lately, she's been lax about writing. Not much word nerd-iness going on here, or at least not much related to the WIP because writing at work has been on full steam since late May. But, she's been feeling the lack of creative work. Many people who are artists and writers can attest to this... how it's an internal feeling of misdirection when not producing material.

In the past, Word Nerd's writing time was about 6-8 p.m. She wrote two novel rough drafts during this general time frame. But as of this spring, that time isn't working... disappearing most of the time into other projects, late evenings at work and no head space left for creative work. This time frame was a holdover from graduate school when those two hours were the ONLY two she had to complete her Creative Fiction class projects. It just took her a while to realize that a schedule that worked six years ago wasn't working anymore.

So, this morning Word Nerd began the process of switching her writing time to the morning before work. The alarm went off at 6 and she got out of bed then, no hitting of the snooze button. The goal is to gradually work that time back to 5, to give her two hours of writing time in the morning when her brain is fresh.

This morning, she managed to carve out a few minutes even in the compressed schedule and it felt good. Word Nerd talked to several other writing contacts about their schedules and found that 5-7 a.m. (or earlier) was popular and productive. She really hopes this solves the lack of productivity problem and makes for some good writing time.

She's curious though --- who else writes in the early morning? Or how did you establish the writing schedule you have?
Posted by Bethany K. Warner at 1:47 PM No comments:

Word Nerd is gratefully turning the reins over today to YA author Sean Beaudoin to talk about his new book, Fade to Blue. She's got a lovely copy of the ARC which she's looking forward to reading. In the meantime, as she tries to get her own writing back on track, do her real job and read through a friend's WIP, she's leaving you (for today, at least) in Sean's hands.

Take it away, Sean Beaudoin....

Hey, Fade To Blue is a book about losing it. Your mind, some weight, your best friend, your father, a conception of reality, and a dog. Where did the dog go? Hint: Don’t look in the trunk. There’s zombies. But for only about 10 pages. There’s Sophie Blue, possibly not her high school’s most popular student. There’s Kenny Fade, possibly his school’s owner of the coolest red Jeep. Sophie’s got a brother named O.S., which could stand for any number of things, like Outstanding Student, Original Sin, or Obese Sity. At least according to his cafeteria detractors, of whom there are many. O.S. has a bit of a weight problem, and is overly fond of comic books. He also has a big frizzy perm. Or does he? No, actually that’s another book. O.S. is bald. Shaved right down to the scalp.
Man, it was fun writing Fade To Blue. I hope it’s a lot of fun reading it. But I didn’t want it to be too easy. So, it’s also a puzzle. There’s a mini comic in the center that gives clues as to what’s going on. Or what’s not going on. I keep getting emails from people asking “Wait, so, if Sophie did this, did she do that?”
My answer is usually maybe. Which is guaranteed to annoy 33.4% of the reading public. But, as marketing studies show, the other 66.6% really likes to unravel the knots on their own.

WARNING: There are no vampires in this book. Unless you count wearing black lipstick and staying up late at night by yourself and maybe sitting on the roof while you watch cars zoom down the overpass at the edge of town.

My only piece of advice for potential readers is: BEWARE THE NURSE! You can’t trust a nurse as far as you could kick a lemon pie.

Unless your mom or dad is one, in which case they’re under-appreciated and underpaid.
Posted by Bethany K. Warner at 8:44 AM No comments: 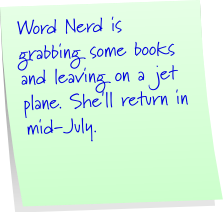