Title: Moonshine
Author: Rob Thurman
Length: ~350 pages
Genre: paranormal/urban fantasy
Plot Basics: Cal Leandros and his brother Niko have taken up doing bodyguard/detective work in New York City, cleaning out monsters and working for the city's paranormal residents. They are hired to help one of the city's mafioso werewolves make a move against one of his competitors. The hit goes south and in retribution, Cal and Niko's friend -- Georgina -- is taken hostage. As they work to find and free her, Cal deals with his half-non-human side, a side that might save or destroy them all.
Banter Points: It had been a while since Word Nerd read the first book in this series, "Nightlife." Thurman gets a thumbs-up for nicely recapping the plot of book one without it feeling like an info dump. Also, Thurman writes good action sequences and nicely elevates the stakes in the plot throughout.
Bummer Points: Cal has a very sardonic voice through the book... while his insults are usually funny, the wry tone gets a little tiring.
Word Nerd Recommendation: If you like an author like Charles de Lint but would rather your urban fantasy be a bit grittier, this series is for you. Thurman has a third book out, "Madhouse" that Word Nerd will pick up sometime.
Posted by Bethany K. Warner at 9:20 AM No comments:

Title: The Curious Incident of the Dog in the Night-time
Author: Mark Haddon
Length: 221 pages
Genre: literary fiction
Plot Basics: Christopher is a 15 year-old autistic boy. One night, he finds his neighbor's poodle murdered in her front lawn and decides to be like Sherlock Holmes and figure out who killed the dog. His quest lands him in trouble with his father and opens up family secrets that Christopher wasn't supposed to know.
Banter Points: All the hype that surrounded this book a few years ago when it came out was well worth it. Haddon's writing -- a first person narration from Christopher -- is inventive and accurate. Anyone who's worked with an autistic or special needs kid will marvel at Christopher.
Bummer Points: The ending, to me, seemed like a let-down. Word Nerd wanted a little bit more of a glimpse that Christopher was going to be OK at the end of the story.
Word Nerd Recommendation: A must-read for everyone to gain a better appreciation of the unique gifts and talents that those around us who are labeled as "special needs" really have.
Posted by Bethany K. Warner at 2:06 PM No comments:

Book Banter -- The Dark Flight Down

Title: The Dark Flight Down
Author: Marcus Sedgwick
Length: ~250 pages
Genre: YA horror
Plot Basics: Now free of the magician Valerian, Boy finds himself taken in by the mysterious Kepler and separated from his friend Willow. When Boy goes to retrieve something for Kepler from Valerian's old house, he's taken by the imperial guards of Emperor Frederick. Frederick's right-hand-man, Maxim, thinks Boy's connection to Valerian could lead him to the book and help him aid Frederick's quest to become immortal.
Banter Points: A wonderful sequel to "The Book of Dead Days." It wraps up loose ends from the first one, but is enough of a story on its own, perhaps even more gripping than the first.
Bummer Points: The revelation about Boy's true identity seemed a bit predictable.
Word Nerd Recommendation: Read it.
Posted by Bethany K. Warner at 10:11 AM No comments:

Word Nerd apologizes for this post being so late... she just kept forgetting to crunch the stats.

Also, Word Nerd has crossed the 500 book milestone since starting her list! It took a little better than five years, but she has now read 500 (actually, 501) books since March 2003.

The book to cross the 500 mark? The Book of Dead Days by Marcus Sedgwick.
Posted by Bethany K. Warner at 8:24 AM 1 comment:

Title: The Book of Dead Days
Author: Marcus Sedgwick
Length: 273 pages
Genre: YA/paranormal/horror
Plot Basics: Boy spends his life as the famulus for the magician Valerian, assisting him with his stage show and doing his bidding, hoping to please the enigmatic man. During the dead days between Christmas and New Year's Valerian sends Boy on an errand to retrieve some vital information for him. When the errand goes awry, Boy, Valerian and Boy's friend Willow start a race against time to find a piece of knowledge to keep Valerian alive.
Banter Points: Gripping and un-put-down-able. Sedgwick keeps the tension high throughout the whole story but doesn't lose his wonderfully sparse and lyrical style because of it. One part "The Prestige," one part "The Gunslinger" and one part invention, Sedgwick delivers all around with "Dead Days."
Bummer Points: Word Nerd wishes this were actually an adult book instead of a YA title because she's interested to see how Sedgwick would have ramped up all the characters.
Word Nerd Recommendation: Grab a copy and read it in the bright light of the day because you won't want to read it in the dark!
Posted by Bethany K. Warner at 8:14 AM No comments:

Title: Murder Melts in Your Mouth (Blackbird Sisters mystery)
Author: Nancy Martin
Length: ~280 pages
Genre: mystery
Banter Points: Philadelphia amateur sleuth Nora Blackbird is trying to figure out who was responsible for the death of philanthropist Hoyt Cavendish. Unfortunately for Nora, all the signs point to one of two people -- either her father, mysteriously returned, or her best friend, Lexie. As the investigation continues, Nora discovers new things about her family and find the truth about Hoyt's murder, with the help of her off-again Mafia boyfriend Mick Abruzzo.
Banter Points: This was a good entry into a good series. It was nice to see Nora's parents as characters and this book had a little more depth for Nora and everyone else and less of the silly antics that pervaded the other ones. Martin also seemed to realize that Nora's repetitive fainting was getting old as a plot device and used it sparingly in this book.
Bummer Points: It'll be awhile before Martin comes out with the next one...
Word Nerd Recommendation: Thumbs up again for the Blackbird Sisters. Fans of Janet Evanovich, take note.
Posted by Bethany K. Warner at 10:04 AM No comments:

Word Nerd is packing up her car tomorrow and heading back to the northern climes of Wisconsin to see her pals from her reporter days.

She is very excited about this.

She might even skulk about the Oshkosh Public Library a bit for old times' sake.

After this trip, Word Nerd also plans to return to some serious work on the book. It's been sorely lacking of late with major work deadlines and writing workshops to teach and travel. She also really hoping to return to doing author interviews to bring some regularity back to the blog. It's harder to do those since they aren't work related anymore, but far from impossible. (Maybe here's Word Nerd's public thanks to the authorsontheweb.com promoters who are keeping Word Nerd in review copies and interviews so far.)

Anyway... if you are a O-towner, keep your eyes open for Word Nerd and say hi.
Posted by Bethany K. Warner at 3:11 PM No comments:

Title: Blood Rites (Dresden Files, book 6)
Author: Jim Butcher
Length: 372 pages
Genre: urban fantasy
Plot Basics: Chicago's only professional wizard Harry Dresden accepts a case from Thomas, a White Court vampire who has helped Harry out in the past. The case is to protect an adult film director from a wacky, but deadly, entropy curse that keeps hurting people around him. Being Harry, however, his goals to do the right thing and protect women land him in much hotter water than he expected, going up toe-to-toe with a succubus, a nest of vampires, and undead lord and his own heritage.
Banter Points: Word Nerd really likes this series. Just to be clear, Word Nerd really likes this series. One of the biggest things that sets it apart is how Harry Dresden is forced to change through the series. By book six, it is very much not the same Harry readers were introduced to in book one. Butcher manages, however, to not only deliver a great character story, but his fight scenes and the book's action makes for a fast-paced, page-turner.
Bummer Points: Word Nerd was a bit disappointed with how Butcher did some pretty big info dumps in this book. They were thinly veiled as a confession from Harry's former mentor Ebeneezer, but all in all, still an info dump.
Word Nerd Recommendation: If you haven't become familiar with this other wizard named Harry, it's high time.
Posted by Bethany K. Warner at 8:29 AM No comments: 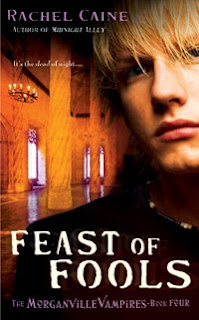 It's the fourth book in Rachel Caine's Morganville Vampire series. The first three have been great reads and if the cover art is any indication, this one looks good too. Word Nerd may be making an emergency trip to Borders after work today to pick herself up a copy.

As if that wasn't enough, next Thursday, this one comes out.

Since that picture is small, it's "Kushiel's Mercy" the sixth of Jacqueline Carey's Kushiel books, a top-notch fantasy series.

Too many good books. Not enough hours in the day.

Book Banter -- My Swordhand is Singing

Title: My Swordhand is Singing
Author: Marcus Sedgwick
Length: 200 pages
Genre: YA horror
Plot Basics: In the old woods of Eastern Europe outside the village of Chust, Peter and his father Tomas work as woodcutters. As the deep of winter descends on the village, a rash of strange deaths reignites legends of the Snow Queen and perhaps a darker evil. With the help of gypsies, Peter and his father must face this menace in this retelling of an early vampire legend.
Banter Points: Word Nerd wonders if there's something about writers named Marcus... Sedgwick definitely takes his place in Word Nerd's mind as a writer to watch along with Marcus Sakey and Markus Zusak. Kudos to Sedgwick for once again making vampires scary, and not the almost-human type of character roaming around a lot of popular fiction. Word Nerd wasn't that familiar with this particular early vampire legend, but that didn't detract from the story. In fact, it rather helped to keep the story moving. It was the title of this book that got Word Nerd to pick it up and Sedgwick did a good job of waiting until the end of the story to make the title click.
Bummer Points: Word Nerd would have liked this book to be scarier, but perhaps for its intended YA audience, it's scary enough. Also, Sedgwick writes these ridiculously short chapters that broke the action up too much.
Word Nerd Recommendation: If you are a vampire fiction fan, try this one out. Or, if you like YA fiction with some substance, it's a good read.
Posted by Bethany K. Warner at 10:42 AM No comments: