"Author Answers" is becoming "Editor Answers" this week with T.L. Perry, co-editor of the "Wretched Moments" anthology released in 2010 from Pill Hill Press. Word Nerd is a fan of T.L. -- not just because he accepted her story into said anthology -- but because he's a great writer and definitely somebody to watch for in the future. 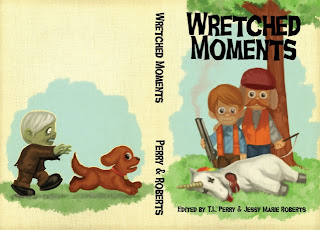 Word Nerd: Where did you come up with the idea for the Wretched Moments anthology?

T.L.: When I was a kid, one of my aunts loved to collect Precious Moments figurines.  I always thought it would be a great idea if someone took the style of those figurines—doe-eyed and sweet—and used it to depict awful situations.  I even came up with idea for the first line: Death by Chevrolet, Face Down in a Puddle of Blood, Fido Finds The Clorox, etc.  But I’m not a very artistic guy—most of my drawings resemble the work of a third grader—so I put the idea on a shelf.  It took me twenty years to realize that the idea could translate to a theme anthology.
Word Nerd: You're a lawyer by day -- what was it like working as an editor for this project?
T.L.: Being a lawyer is a lot like being an editor.  You review a document for typographical errors and factual errors, but you also look at the ideas the author is trying to express through his or her writing.  If the idea doesn’t work, the writing—be it a brief or a short story—is DOA.  One of the big problems I had editing this book was when the idea did work, but the execution was off.  One of the things lawyers are famous for is noodling with language and structure.  I think most of us could spend days agonizing over a brief or a memo, adding things and subtracting things.  Of course, a client doesn’t want to pay for that, so we have to let go.  When I was editing this project, I felt the same urge—someone would send a story with a good idea but maybe not the best execution, and I’d want to spend a day (or two or three) reshaping the story.  Unfortunately, we had so many submissions that I just had to let those stories go.  I always tried to give a kind word to the authors, though.
Word Nerd: Which story in the anthology is your favorite and why? (It's Pez Dreams, I'm sure...)
T.L.: I’d actually like to call out three stories as list-toppers for me.  The tone of the book ranges from funny to serious, so it’s hard to isolate a single story as the best.  The three I’ll discuss each have a distinctly different tone.
The first is The Woman on the Horse by Brian Ray.  It’s surreal, it’s serious, it’s quirky, and it’s incredibly well-written.  Brian has said that the story is an homage to the Polish surrealist painter Zdzilaw Beksinski, who I was entirely unfamiliar with.  I checked out some of his art and Brian nailed it.  This story really captured me because, unlike most of the others, it had a distinctly literary feel. That’s not to say that the other stories aren’t well-written.  But they are, for the most part, genre pieces.  The Woman on the Horse would have been at home in any number of literary journals, but we were lucky enough to snag it for this anthology.  Brian also has a book out that I will probably pick up – Through the Pale Door.
Second is TJ Wagner’s The Stuff of Dreams.  It’s a comedic take on the afterlife and its connection to dreams that is just so depressingly funny that I challenge you not to like it.  Think Good Omens-style comedy.  This is probably the funniest story in the book.
Last is Kris Triana’s Before The Boogeymen Come.  This is a horror comedy about the lengths to which the monsters under your bed and in your closet will go to keep their jobs.  This story probably best captures the essence of what I wanted Wretched Moments to be-cute and cuddly gone awry.  I have a two year old daughter who has been watching Monster’s Inc. on a loop for the last week, and I can’t help but think of this story every time I watch it.
There are plenty of other great stories.  I’d be remiss not to mention Word Nerd’s own Pez Dreams, Maurice Broaddus’ Snapping Points and AJ French’s Sad Faces.
Word Nerd: What did you learn as a writer from editing others' work for this project?
T.L.:  I learned that I’m not nearly as clever as I think I am, and neither are most people.  Cleverness alone cannot support a story.  I read several stories that had intriguing twists or were built on a cool idea.  These things, though, don’t necessarily make for a good story without more: attention to detail, character development, plot, etc.  Just ask M. Night Shyamalan.
I think every aspiring writer should have to go through a slush pile at least once.  You start to identify your own weaknesses by learning from the mistakes of others.  Now, the trick is to apply that knowledge to what I do …
Word Nerd: What books have captured your attention as a reader lately?
T.L.:  I generally like contemporary literary fiction, but my wife recently handed me Hunger Games by Suzanne Collins.  I read the whole trilogy in a matter of days.  Right now, I’m really digging Adam Levin’s The Instructions and Phillip Meyer’s American Rust.  Some other books that I’ve recently read and loved are Dan Chaon’s You Remind Me Of Me and How I Became a Famous Novelist by Steve Hely.
Word Nerd: What's the best piece of writing advice you've ever gotten and how has it helped you?
T.L.: Someone once told me that when I write,  I have access to an inner-jackass that most people don’t.  It was meant as a compliment, and I took it as one.  I immediately stopped taking myself so seriously and stopped trying to become the next Cormac McCarthy.  I started writing about situations that were amusing (at least to me).  I still work slow and I’m still serious about the craftsmanship of what I’m doing.  But the actual content?  I no longer feel trapped by trying to write something lofty or deep.  I’m just not smart enough to pull it off, at least consciously.
Posted by Bethany K. Warner at 11:07 AM