I watched Twitter light up yesterday about the Borders' bankruptcy announcement and decided I needed to scrap what I had for today and think about this news on the blog.

If you missed the big announcement, here is the Wall Street Journal's coverage of it, plus a list of store closings. 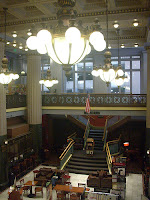 Stacie is relatively unaffected by the closures, but two stores are closing in the greater Indianapolis area, including the fabulous downtown one built into an old building, complete with old bank teller windows in the cafe part.

Downtown Indy is a thriving place, with lots of community investment in the past two decades to revitalize it. It's got a mall, theatres, arts, museums, stadiums, a new JW Marriott hotel... and now, no bookstore. That's right. Not a one.

At the IUPUI campus at the edge of downtown, there's a Barnes and Noble in the student center, but for most of us, buying a book now means a trip to the 'burbs. The downtown Borders for a while has had funky hours, closing by 7 or so on weeknights, which seems odd, given how much foot traffic there still is downtown because of all the aforementioned draws.

I don't want to get into all the woes of the publishing industry. I know it's tough. I know that e-books are changing the landscape. I'm part of that change, plunking down $1.99 for all 1000 pages of Anna Karenina as a e-book instead of $7.99+ for it as a hard copy book. Of the last three times I bought hard copy books, two of those were at a Borders; one was a remainders selection at a Barnes and Noble. And when at B&N, my thought was, wow, Borders always has a better selection...

What's bummed me out really about the Borders closings is the void this puts in the downtown of my city. The public library's hours here have been cut too. In a community that struggles with education (the high school graduation rates here are terrible) losing a bookstore just feels like another blow to all of us working to turn things around for the city.

Hopefully with the closings, Borders can get its act together and keep providing good service and good selection at the stores they've got left. And maybe, maybe, they'll think about coming back downtown.
Posted by Bethany K. Warner at 8:01 AM

Yeah its a sad thing. I post a link about it yesterday on my blog. It makes you wonder what the social side of books will finally become. When books almost sit like caskets on shelves, there's something eary about the process, and more so when they are so loved. They shall make wonderful decor however for lots of mini cheececake cafe stores around the country.

The whole thing has me a little bummed. I found out we're losing our closest Borders (2 hrs from here), which adds an extra 15 minutes to get to B&N. I'm with you - I hope Borders gets its act together, but whatever they do, it won't be in time to save my store. =o(