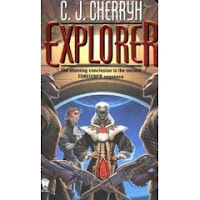 Title: Explorer (Foreigner, bk. 6)
Author: C.J. Cherryh
Length: 408 pages
Genre: Sci-fi
Plot Basics: After traveling in space for about a year, diplomat and translator Bren Cameron, a contingent of the atevi and the rest of the crew of the Phoenix finally reach the space station Reunion to rescue the crew left behind there. But station administration and ship administration don't see eye to eye on who's really in charge. The situation grows more tense when Bren and the Phoenix start communicating with another alien ship in the vicinity and find out that what they were told had happened to Reunion station might not have been how it truly was. Now, Bren has to use all his diplomatic skills to negotiate among the three parties to rescue the station inhabitants and get home safely.
Banter Points: This book brought this series back to life. The first three in the series were great, then four and five really dragged on. Explorer blew the plot open again with lots of action and a fast-paced narrative. Bren got to do what he's good at again, which was nice to see him get back to his linguistic roots.
Bummer Points: Still a bit wordy and the end wrapped up faster than expected.
Word Nerd recommendation: If you liked books 1-3, stick with it through four and five because this makes it good again.
Posted by Bethany K. Warner at 12:07 PM