Word Nerd has the power

Word Nerd and her cohorts in the Oshkosh Area Writers Club have been working on the club's first anthology.

We developed submissions guidelines. Set deadlines (which have been liberally broken by all parties involved, including Word Nerd). We're coming to the end of this process and on Saturday, Word Nerd was given Power.

Let's back up, for a moment.

Word Nerd was not at the meeting when the club decided to put together an anthology. Like all good decisions, Word Nerd was nominated to the committee in charge of this project because she wasn't there to protest said appointment. Turns out, she was appointed to the post of editor.

She's going to get help though. We're having an entire club meeting to edit the stories for 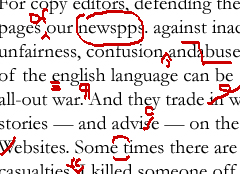 This past Saturday, though while discussing the anthology's progress Word Nerd's fellow committee member who is in charge of layout and format, says, "While we're editing, Word Nerd will have final say on any disputes."

Word Nerd likes good grammar and is pretty good at catching mistakes -- good enough that it earned her the moniker of "Grammaticus" once at another Writers Club meeting -- but good enough to have final say on any disputes? She's not that good.

She's already making some decisions; there will be no use of serial commas, unless, of course, it's an "eats shoots and leaves" thing. Em-dashes should only be used in specific situations. She's making a list of books that the group will need on hand while editing: Strunk and White; Chicago Manual of Style; a dictionary; the AP Style Guide for its punctuation section; Eats Shoots & Leaves because it's helpful and funny; and possibly Lapsing into a Comma because it makes Word Nerd feel good, even if it's not a real practical book for this kind of editing.

If anybody has a Roman helmet Word Nerd can borrow -- or an extra box of red pens -- Word Nerd has a hunch she may need those, too.

(Thanks to poynteronline.org for the copy-edit graphic).
Posted by Bethany K. Warner at 10:02 AM

I have a box of red pens already stashed :)