If you haven't looked lately at the word meter charting the Work-in-Progress progress over there --> go look at it. Go Now. Go Look.

That's right. It's more than half filled in.

Last night, Word Nerd crossed the halfway mark of her target 85,000 words. Her cat was the only witness to the I've-written-half-of-a-novel happy dance and since it could be rather incriminating, he's promised not to tell. Needless to say, she was a bit pleased with hitting 43,000-odd words and having somewhere around 110 pages of a manuscript so far. 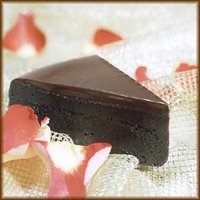 Word Nerd will take on the Hercules' labors for chocolate cake or other desserts involving hot fudge or chocolate chips.

So onwards and upwards. July's goal is 55,000 words by the end of that month. That is only 12,000 words more than what she has now, but with Lifest and EAA AirVenture both happening in July, Word Nerd's day job takes precedence as she writes newspaper stories about music festival stuff and airplanes. She's only sure of 16 days in July when she'll be able to carve out time to write and the 12K words is do-able over that span. She's hoping she can push the July goal to 60,000 words, but will look on anything over 55K as purely a bonus.

Word Nerd can smell the hot fudge already...
Posted by Bethany K. Warner at 10:01 AM

I'm getting it today.

i love this chocolate reward idea. i was salivating over the picture. :D