Title: The Count of Monte Cristo 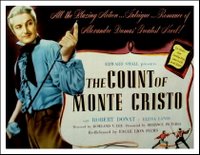 Author: Alexandre Dumas
Length: 689 pages
Genre: classic
Plot Basics: Edmond Dantes, a sailor from Marseilles, is hauled off during his engagement party to the famous Chateau d'If prisoner for allegedly conspiring with the Bonapartists. While in the Chateau d'If, he meets Abbe Faria, who teaches him about everything and leaves him a hidden fortune. Edmond escapes after 14 years in prison, he digs up the treasure and reenters fashionable society as the enigmatic Count of Monte Cristo to exact his revenge on those that put him in prison.
Banter Points: Well, Word Nerd read a classic.
Bummer Points: The book was good for the first half. In fact, at the beginning, Word Nerd was actually enjoying it. Then, in the middle, the minor characters staged a literary coup and took over the plot for awhile, leaving Monte Cristo out of the story for pages and pages. Monte Cristo's revenge-taking at the end was not as dramatic as Word Nerd hoped.

Word Nerd recommendation: Eat the sandwich. Or watch the movie. Or if you're really ambitious, read the book. Word Nerd can commiserate.

So -- any body else read this book? Did Word Nerd miss something or is she not alone in well, not enjoying it very much?

"Eat the sandwich. Or watch the movie." Heh heh...

This is how I felt reading Crime and Punishment. I feel for ya!