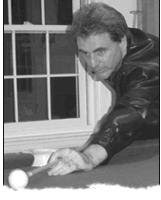 One more author to keep your eyes open for when prowling around the new books in the bookstore is this week's author, Dave Zeltserman. His latest novel, "Bad Thoughts" recently came out.

You can catch up more with Zeltserman on his blog.

WN: "Bad Thoughts" comes out this month... what's this story about and what kind of reader will it appeal to?
ZELTSERMAN: At one level “Bad Thoughts” is a thriller that’s a blend of horror and crime. Recent murders eerily similar to his own mother’s murder twenty years earlier has homicide detective Bill Shannon questioning his sanity as evidence piles up that points to him as the killer. On another level, the book is about survival—specifically surviving tremendous emotional and physical abuse as an adolescent without letting it destroy you. As far as what kind of reader the book will appeal to, I’ll quote from a few of the reviewers for Bad Thoughts so far. According to Midwest Book Review, Bad Thoughts is a must read for thriller fans. According to writer Bill Crider, it’s for anybody looking for a hardboiled anybody-can-die-at-anytime book that’s a change of pace from the usual. Booklist calls it “a compellingly clever wheels-within-wheel thriller... An ingenious plot, skillfully executed.” The book is an intense read, but it’s fast-paced with lots of twists and I think readers looking for something a little different as far as thrillers go will enjoy it.


WN: It sounds like you worked on "Bad Thoughts" for quite some time. What made you stick with it?
ZELTSERMAN: It wasn’t so much that I worked on the book for a long time as that I stuck it in a drawer and forgot about it for a long time. Back in ’97 I wrote Bad Thoughts and back then I was able to get an editor at Warner Books to look at it. He liked it and we ended up going through three informal rounds of editing before he submitted it to his editorial board where it got rejected. In January 2006 I took Bad Thoughts out of the drawer and sent it to Five Star who ended up buying it. If nothing else I’m persistent. In 2004 I sold my first novel, Fast Lane, which I had written 12 years earlier—first to an Italian publisher and then to Point Blank Press in the US.

WN: What's your writing process like?
ZELTSERMAN: I’ll write a detailed outline of a novel before I begin. 6-7 pages will usually translate to 75,000 words. Once I start writing I almost always make detours from the outline—subplots develop, new characters show up—sometimes major ones. The book becomes something organic, taking on a life of its own, but so far I’ve always navigated back to my outline no matter how far off track the detours might’ve taken me.

When I’m working on a novel I try to write each day—usually 1-2 hours each night, and 5-6 hours each weekend day or holiday. Sometimes it’s a struggle to get 300 words done for a day, sometimes the writing flies and I’ll get 3,000 words. After each 50 page chunk, I’ll spend some time editing that chunk before working on anything new.

The most important part of the process is when I’m done. My wife and a core group of readers will read the book and help with editing. That’s the phase where the book gets tightened up and becomes something I can send to my agent.

WN: Were you a reader as a kid... what turned you on to reading/writing books?
ZELTSERMAN: I was a voracious reader as a kid. I started off in 1st grade reading the Freddy the Pig Detective series, at some point moved onto comic books, Mad Magazine, then fantasy books, including HP Lovecraft and Robert E. Howard’s Conan series, and then sci-fi, Ian Fleming’s James Bond series (my dad had all of them), before discovering crime fiction. I was 12 when I first read “I, the Jury” by Mickey Spillane, and I was hooked. A friend later introduced me to Hammett and Chandler, which I quickly devoured, and then I discovered Rex Stout, which I loved. By college I had read most of the classic mystery/crime novels. By then I was reading close to a book a day, mostly classics. My school library had a complete collection of Edgar Allen Poe (which is massive), and within a month I had it read.

I started writing occassional stories back in high school, and had my first story published in my high school’s literary magazine, but it was mostly a lark. I was always more of a math guy, majored in computer science and math in college, and thought I had no right writing fiction. But it was something I always enjoyed and gravitated back to. The last four years I’ve been taking it very seriously.

WN: What's the best part of being a writer to you? What's the most challenging part of writing for you?
ZELTSERMAN: The best part is when I’m writing. When I get completely immersed in what I’m writing it’s the best feeling in the world—probably when I feel most alive. I love the creative part of it. The most challenging (worst) part of it is the waiting. As a writer you’re always waiting. Waiting to hear back from an agent. Then when you get an agent, waiting for your book to sell. The worst is when you hear an editor wants your book and then you have to wait to see if she can get it through her editorial board (the first 10 or so times with me, the editors struck out getting my books through). Then once you get the offer, waiting for the contract, then waiting for the book to be published, then for the reviews. You’re always waiting, and as a writer it can tear you up. What works best for me is to dive into another project. When I’m working on something the waiting doesn’t bother me.

WN: What's next for you as a writer?
ZELTSERMAN: Serpent’s Tail is going to be publishing a trilogy of noir books of mine—Small Crimes, Pariah and Killer—that are based loosely on a “man just out of prison” theme. The first of these will be out next March, and I’m very excited about this.

WN: What is the best/most influential book you have ever read and why did it inspire you?
ZELTSERMAN: Hell of a Woman by Jim Thompson. The book completely changed my view of writing. This was probably the first unreliable narrator that I came across-in this case what appears to be a down-on-his-luck decent guy who turns out to be out of his mind. The way Thompson suckered you into this guy’s private hell was remarkable, but more than that I never saw a book before that took the kind of chances that this book did. It opened my eyes to the fact that there are no set rules if you can make it work. The ending was mind blowing—the train of thoughts coming from both sides of a schizophrenic personality as they intersect. Of course, it didn’t hurt that Thompson was one of the great pure writers of the last 50 years. Reading that book changed my whole outlook on writing, and really freed me to write the way I wanted to.
Posted by Bethany K. Warner at 5:45 PM