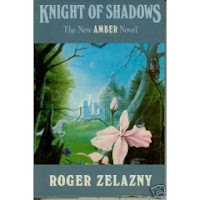 Title: Knight of Shadows (Chronicles of Amber, book 9)
Author: Roger Zelazny
Length: 251 pages
Genre: fantasy/sci-fi
Plot Basics: Merlin, a sorcerer is his own right and son of Corwin, one of the Amber Princes, is still trying to untangle the death attempts on him over the past few years. And in his seeking, he's been caught up in a plot between Amber and the Courts of Chaos. The magic -- the Pattern and the Logrus -- that controls both places wants to claim Merlin for their own, since he's descended from both. But Merlin has other ideas... ones that generally involve living when the Pattern and the Logrus might want him dead.
Banter Points: Zelazny's travel-and-then-fight plotline works again in this book as it has in the eight previous without seeming overly repetitive. Many of the familiar characters and magical items are back.
Bummer Points: Like one of the books in this first Amber cycle (books 1-5), this one gets into very hard to follow images as Merlin tries to navigate where he is. The images are jarring because they are so unlike anything a reader will have really seen.
Word Nerd recommendation: Still a must-read series for anyone who says they are a fantasy fan.

Nice to see him still getting praise after all these years. Was one of my favorite writers way back when...