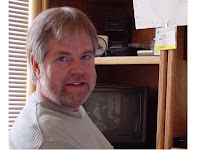 This week's author is Jay MacLarty, author of the Simon Leonidovich series. His latest book in the series is "Choke Point," and he's also working on a stand-alone novel.

WN: You've got four books out featuring Simon Leonidovich. Where did the idea for this character come from.
MACLARTY: I conceived the idea with a colleague. We intended to collaborate on a story, and were brainstorming ideas, trying to come up with an unusual profession that would thrust our protagonist into unexpected problems and perils. An international courier fit that criteria. Ultimately, we found working together to be impossible, and I ended up taking over the project.

WN: And what kind of guy is Leonidovich?
MACLARTY: He is not one of those Teflon-skinned superheroes. Simon is an average guy with an abundance of street smarts, who struggles with his weight and feels insecure with women; which, of course, they find endearing. Women – who are not the typical thriller audience – love him, and love the books.

WN: You had a variety careers before turning to writing novels. What else have you done and how has that helped with the writing?
MACLARTY: I started in the hospitality business, putting together a nation-wide chain of restaurants and nightclubs. Burned out by the age of thirty, I created a computerized handicapping program, then “ran away to play the ponies.” That was too much fun, so I decided to do something more serious, and ended up working for a year on a presidential campaign. What can I say, the guy lost, and I had to find real work; so, turned my attention to the organizational business, and a chain of retail stores. Along the way I managed to start a small software company, and write The Courier. The rest, as they say, is history.

These work experiences have helped – especially the political and technological background – but more than anything, it is the wide range of “life experiences” that has given me the building blocks for storytelling.

WN: What's your writing process like?
MACLARTY: From a planning standpoint, I work within the framework of a loosely constructed plot chart. I know where I'm going, but don't define the story to such a degree that I stifle the creative process. From a physical standpoint, when I'm working on a book, I always work seven days a week – no exceptions. I get up around five in the morning, eat breakfast and try to invent some excuse not to work. This stall may last from thirty minutes to two hours, but eventually, and always, I'll force myself to face that ugly blank screen. Once I'm at it, I work nonstop until the creative juices dry up, usually around three in the afternoon, then I go to the gym. After that I may edit for an hour or two, but I'm never able to move forward creatively once I hit the wall.

WN: Were you a reader as a kid?

MACLARTY: Yes. I started with the Hardy Boys, and graduated to adult novels.

WN: What turned you on to reading/writing books?
MACLARTY: I don’t really remember, but I’m sure reading offered an escape – that, and not having a television.

WN: What's the best part of being a writer to you? What's the most challenging part of writing for you?

MACLARTY: Just sitting down every day and doing it, which is, by far, the most difficult thing I’ve ever done. The best part is the satisfaction of touching reader’s lives – hopefully in a good way – and hearing about it.

WN: What's next for you as a writer?
MACLARTY: I’ve made the hard decision to step off the series juggernaut and move on to what I consider “bigger” stories, with more provocative underpinnings. I’ve just finished A Child of Fate: the story of a young woman searching for her place in the world, who suddenly finds herself trapped in the Canadian wilderness with five male colleagues, and facing the ultimate test of her leadership, and her womanhood. A small excerpt is now available on my website: jaymaclarty.com

WN: What is the best/most influential book you have ever read and why did it inspire you?
MACLARTY: That’s a tough one, there have been a few, but to pick one, I would have to say Trinity by Leon Uris; not because it was the best book I ever read, but because the story sparked an idea for a novel which led to my writing career – a novel I’ve been working on for nearly twenty years.