A book for the more ambitious reader 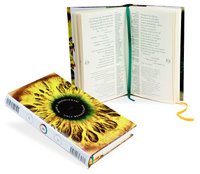 If you pay attention to Word Nerd's "Currently Reading" post, you might have noticed that for a week or so, Mark Z. Danielewski's Only Revolutions was listed. Then it vanished and with no subsequent Book Banter post.

Word Nerd is admitting something she doesn't do often: She gave up on the book. Cuz frankly, she was lost.

When Word Nerd saw that Danielewski had a new novel out, she was excited because she enjoyed his breakout debut novel, House of Leaves, with it's very creepy story, four layers of plot and the word house (just like that in blue type, everytime).

She knew his new book, Only Revolutions, would be strange. After 50 pages (or maybe it's 100) Word Nerd was completely lost.

The Washington Post Book World has a review of Danielewski's new offering. It's a pretty good explanation of how the book is laid out and some of the plot.

The book has its own website, too. Have earphones if you're in a public place.
If anybody else has taken this book for a spin, Word Nerd's interested in the reaction.
Posted by Bethany K. Warner at 9:21 AM

Ha! Assuming you got this book out of the library, and returned it, I think I was the person who got it after you. It's sitting at home, waiting to be read now.

I'll let you know how I do. I really enjoyed Leaves, but couldn't read anything else at the same time...

Yes, I did get the book from the library. Lucky you that I returned it early instead of keeping it until it's due date.

Luck to you in the reading, JGDP.