I really promise, this isn't a cat blog.

Except today, it is again. 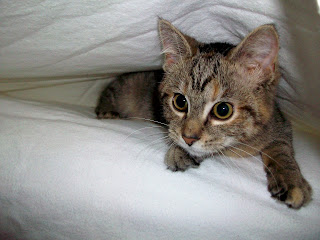 Mina's five months old, has more than doubled in size and become one furball of fiestiness in just two short months. Today she's off getting certain parts taken care of to ensure she doesn't become a kitten mama. Last time we were at the vet, the vet asked if there was a story behind her name.

Yes, I said, explaining about the whole I-name-my-pets-after-literary-characters thing. He then asked the tech if she knew where the name came from when she came back in the room. She didn't. "Dracula," he says and suddenly, there's that weird look of oh, you're one of those people who read vampire books. (Oddly enough, a woman in the waiting room said she used to have dog named Mina... didn't ask her if it was after the Dracula character or not...)

As for her role on the co-editing team... let's just say she's still new to this creative process. Have you tried to write cohesive fiction when Wrestle Mania is going on under your desk chair? Or your laptop cord is being vanquished? Or your shoelaces attacked? Or your fingers getting alternately chewed/groomed while you try to type? 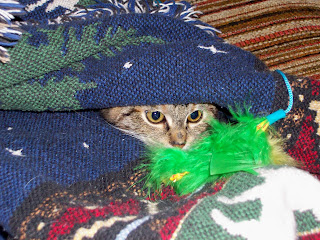 Some mornings, it's just a good thing that she's cute. And later, when she purring like mad, it's easy to forget that she's such a terror. Gatsby's temperament has changed some too; he's amazingly tolerant most of the time, except when the tail-chewing really starts, he's vocal and angry and there's hissing and chasing until Mina listens to him that he's not having any fun.

Which is a good thing to remember while creating characters. Everybody has more than one side. Maybe the debonair businessman treats women like trash. Maybe the lunch lady dreams of being a hand model. Maybe the evil prince has a tender spot. Maybe the villain is so slippery that the evil is forgotten when he turns on the charm.

And like Gatsby, stressful situations change people. New conditions bring out unexpected behavior. (At the moment, Gat is sitting on top of a box, watching her play with a kitten chew toy and looking haughty.)

Maybe this editing team still has something to offer, other than chewed up drafts and disdainful looks.
Posted by Bethany K. Warner at 6:51 AM

i enjoy the kitty updates! they're both very cute. :)

OMG, your cats are so cute. And great post. You're so right that characters should have as many layers as our fine furry editors. =o)

What a fantastic and adorable post! Whenever I try to write my cat into anything, even if there was a very clear intention when I sat down, it always devolves into gibberish and fuzziness. I will visit again soon!

I always wonder if a terrible situation for a character is accompanied by evil, cackling laughter or tears. Now, I'm picturing cats chewing on shoe laces :)

This is amazing (and a bit creepy)! My new kitten Odin (named from Gaiman's American Gods, and you know, that whole Norse business) is five months old yesterday also, and he looks exactly like Mina! You didn't get him from a girl in Morrisville, PA, by any chance? I had to ask, it would be such a small world if you did!

Gina...Mina's a hoosier kitty from Bloomington IN. That would have been really spooky if they were related. Hope your little Odin is doing well.