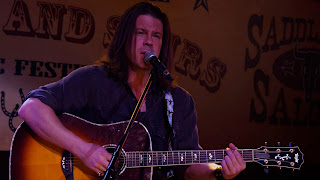 One of my favorite shows to watch is Leverage, on TNT. Five ex-cons are now on the side of the little guys, fixing the wrong doings of whatever bad guys happens to come their way. One of the characters, Eliot Spencer played by Christian Kane, is the "hitter" of the group, known for his bone breaking, face pummeling, back ally brawls. In other words, he regularly kicks ass and looks HOT doing it.

But on Season 3, Episode 6: The Studio Job, Eliot takes the role of a singer-song writer who is about to hit it big - until his song is stolen by guest star John Schneider. Of course the Leverage team proves that Schneider is stealing the songs written by their client.

When I found out that Christian Kane was releasing a whole album, I was thrilled. I loved this episode and the two songs I had heard so far: "Thinking of you" and "House Rules."

Now that I've had the album for a little more than a month, I still enjoy it, but I can't quite shake my impression that it is Eliot Spencer - not Christian Kane - that is singing it.

The music is a typically mix of country ballads, fast-paced dance mixes and a remix of another great. Kane has a fabulous voice, but I can't quite leave Spencer and only hear Kane. If I could, I'm not sure I would like the album as much as I do.

Spencer's role is necessary for the Leverage team. They need him to beat up the guys who want to run away or want to cause damage to one of the team members. But then there is this soft side that is exploited during "Thinking of You," a tender ballad of parted lovers. It's the juxtaposition of Spencer's kick-ass attitude against unrequited love that made the song a hit for me.

As decent as the album is, I wonder how it would have done if Leverage hadn't been the platform to launch it against.

Sort of like when an author's offspring launches a decent, but not fabulous, book.

Posted by Stacie Penney at 6:18 AM