Over on the West Coast, in San Francisco, in a few hours when it actually becomes morning there, Bouchercon 2010's program schedule kicks into full swing. Mystery readers and writers rub elbows and tell funny stories and sign books and it's a blast.

And I'm not there.

I'm missing panels with people like Brad Parks, Simon Wood, Cara Black, Hank Philipi Ryan, Marcus Sakey, Kat Richardson and dozens of others. I'm not going to get to go to Lee Child's "Reacher Creature" party. (Last year, it was great fun to tell people that Lee Child bought me a drink... of course, he buys everybody at the party their drinks, but like any good story, part of the impact is in how you tell it...) This year, there is apparently also a dance which maybe I'm not so sad that I'm missing. (I have traumatizing visions of middle school and high school dances floating in my head; on the other hand, I've seen the quantities of alcohol that writers guzzle at these things and so maybe the dance would be not so bad... I hope there are pictures later....)

And I'll miss the free books. Truth to tell, I still have free books from last year that I haven't read, but doggone it I will read them someday!

Check out this photo from the BoucherBlog of the "loot" to be given out in book bags this year... 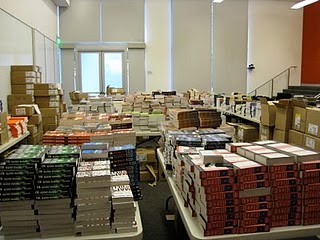 So, I've got my eyes set on Bouchercon 2011 which is in St. Louis and much closer to home. In the meantime, I'm going to keep writing and keep reading.

Hopefully, we can talk about it all next fall.
Posted by Bethany K. Warner at 9:01 AM