Getting to the end is hard.

There are stories that I don't want to end, because I love the characters or love the action or how all of it ties together. And even though I know that if the writer kept going the story would start to suck because the story's been told, I still wish it could go on. 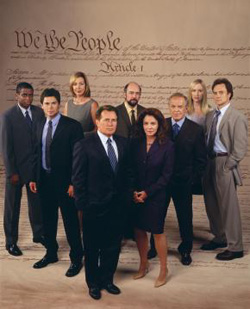 It's not just books that make me feel this way, but sometimes TV shows too. Like currently, I have one more episode of West Wing to watch and then I'll be done with the series.

I missed this show and all its snappy politics when it was on network television -- I was busy learning how to be a reporter. And then I missed it in syndicated reruns because I didn't (and still don't) have cable. But through the power of Netflix and a good friend who owns all seven seasons, I've now watched all seven seasons, but for the last episode. And I don't want to watch the last one. Except I do.

This isn't the first show I've felt this way with. I remember this when X-Files ended. And when I reached the end of the David Tennant/10th Doctor episodes. And a little bit when watching the final season of Buffy. And Firefly. (OK, alot with Firefly...) Same with the fictional worlds of Jacqueline Carey's Kushiel books. And Nick Sagan's Idlewild series.

I've traveled along time with these characters. It's taken me a few years to get through all the back seasons because I didn't want to just devour them one after another. I've cried at poignant episodes and been proud of characters and ashamed with them and shocked at the turns of that fictional world's events.

I don't think the show would have continued well had it gone one to season 8 and the start of the Matt Santos presidency. I think seven years of a political procedural drama is really probably all any viewer can take. Whoever decided the show was finished at this point made the right decision.

An ending like this really allows for imagination to take over. What happens in the Santos presidency? Can Josh and Donna really make their relationship work while both working in high power positions in the White House? Does the fictional war in Kazakhstan end well?

So, by the time this posts, I will most likely have popped myself some popcorn and sat down to watch the final West Wing episode. I'll let my imagination take over for the rest.

And in the meantime, I'm taking nominations for what TV series to watch next.
Posted by Bethany K. Warner at 7:27 AM

castle! funny, campy, and drops hints to nathan fillion's past life as capt. reynolds throughout the series! awesome!! :)

Supernatural. Though that comes with a warning: It doesn't get great until somewhere in season 2. But when it gets great, it just keeps BEING great, and getting better.