Just over a month ago now, Word Nerd moved into a new apartment.
The highlight of the new place is this: It used to be an elementary school and when they did the renovations, they left five large blackboard panels in the living room. Word Nerd could not believe it -- it's like a dream for a writer who was trying to keep notes to herself on sticky-notes attached to her wall.
Two of the boards near Word Nerd's desk are her writing boards. A part of a third board has been taken over for her weekly editing schedule.
Here's a glimpse of what it looks like: 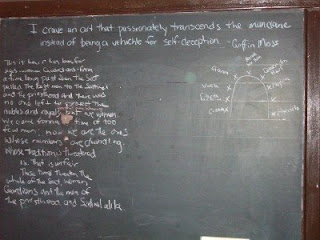 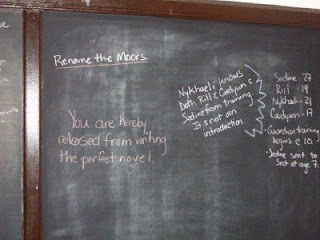 Here's a close-up of the best advice Word Nerd's got written on her board. A few weeks ago, she saw writers Marcus Sakey and Sean Chercover at a local appearance here. Marcus said he taped this phrase to his monitor. Word Nerd's shamelessly ripped it off because it is so liberating. 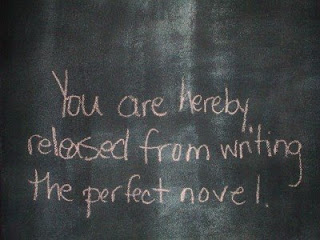 Oh my god! I want to live in your apartment. That is so cool.

That is totally awesome! We have a couple corkboards, which are mostly covered in appointment/hospital stuff, and something I still need to mail to the IRS.

In theory, they were for some writing stuff. ^^;

Love the inspirational blackboard. The pictures is fabulous too. Thanks for posting it!

Rip away, Bethany. That line has saved my butt many times. :)

Sean -- yeah, when I saw this apartment, I knew I would rent it just for the chalkboards.

Ashley -- trust me, the other boards are covered in less fun stuff.

Marcus -- Thanks. It's been a huge help and made the revisions feel more do-able.

That is a fantastic feature! I wonder what made them leave the boards up, too. It might have been too hard to get them off the walls though. Some of those old chalkboards were very heavy. We used to have a chunk of one from the grade school my mom went to.