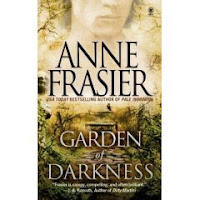 Title: Garden of Darkness (releases 12.4.07)
Author: Anne Frasier
Length: 384 pages
Genre: thriller/horror
Plot Basics: Welcome back to the town of Tuonela, Wisc. The town, long plagued by stories of a vampire called the Pale Immortal, is hoping to capitalize on the legend as a tourist attraction, putting the body of the Pale Immortal, Richard Manchester, on display in a museum. The display brings to town ghost hunters and film students all hoping to capitalize on the event. And some of them start ending up dead, making it impossible for Rachel Burton, the town's medical examiner, to leave and go back to California. The town gets in a frenzy over the Pale Immortal and the killings, though none more so that Evan Stroud, who maniacally starts digging up part of the town, looking for a dangerous key to the town's haunted past.
Banter Points: This book is creepy -- not for reading before going to bed and not for the faint of heart, even during daylight hours. Frasier definitely delivered on this sequel to Pale Immortal. It was nice to see the characters move ahead (or try to) in their lives, as they were impacted by the events that happened in P.I.

Bummer Points: There was some switching POV stuff that just isn't Word Nerd's favorite literary technique. Frasier did it well, but it's just not a technique that Word Nerd likes.

Word Nerd recommendation: Mark Dec. 4 on your calendars for the release date for this one.