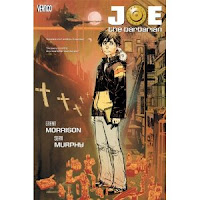 Title: Joe the Barbarian
Author: Grant Morrison and Sean Murphy
Genre: graphic novel (deluxe edition)
Length: 246 pages
Where Word Nerd's Copy Came From: IMCPL
Plot Basics: Joe is a loner middle-school student, picked on at school, and always needing to keep a can of soda in reach to keep his hypoglycemia at bay. His father lost in the war, he and his mom are in danger of losing their house. One rainy afternoon, Joe's disease (or is it?) sends him on a wild quest in a magical land where he's lauded as the promised Dying Boy who will save them all. 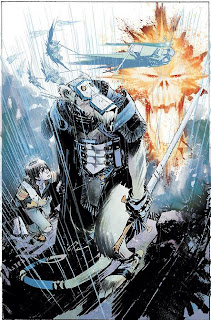 Banter Points: I found this title through Wowbrary and it's one of the best finds I've had through that service. Combining amazing art and an equally amazing story, Joe the Barbarian is the kind of graphic novel for people who don't think they read "comic books." The idea that Joe's quest may really be low-blood-sugar hallucinations feels like an idea that could get old after a few pages, but Morrison and Murphy make it work for page after page, bringing the reader back to one "reality" and then sending them crashing back into another till it's unclear which is really true.

Bummer Points: The story actually smooths out after the first couple chapters, if you can hang on through some choppy character transitions at the beginning.

Word Nerd Recommendation: I had to quick read this before it was due at the library and then, as I was dropping it in the book drop, I thought Whoever gets this next is one lucky person. Read it.
Posted by Bethany K. Warner at 6:38 AM