Book Banter -- Don of the Dead 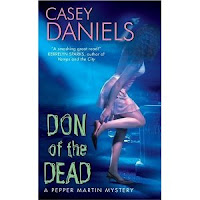 Title: Don of the Dead (Pepper Martin series bk. 1)
Author: Casey Daniels
Genre: chick lit/mystery
Length: 325 pages
Where Word Nerd's Copy Came From: Indianapolis-Marion County Public Library
Plot Basics: Pepper Martin can see dead people -- in specific, a dead Mafia don buried in the famous Cleveland cemetary where she works as a tour guide. Augustino Scarpetti was gunned down almost a half-century earlier but now, he's got Pepper to figure out who put the hit out on him. Pepper, never forced to work before her investor father got convicted of financial crimes, doesn't want to play detective for Gus. But he keeps popping up at inopportune times -- like when she's flirting with Dr. Dan or Quinn the cop. Pepper's investigation leads her into the Mafia that still controls part of Cleveland, bring the FBI on her trail and keeps her dodging bullets to stop her from getting to the truth of the dead Don's death.

Banter Points: An absolutely entertaining, page-turning read. While the premise a little goofy, the book reads well as Pepper doesn't believe her new found ghost-seeing power and stumbles through conducting an investigation. Pepper is a spunky heroine with a hilarious internal monologue running through most of the story. The men -- Gus, Dan and Quinn -- were also great characters and I'm looking forward to seeing Dan and Quinn in subsequent stories. Dan definitely is not entirely the mild-mannered and bookish doctor he first appears as and Quinn is set-up to be the bad-boy cop. It has the feeling of the early Stephanie Plum-Joe Morelli - Ranger triangle and it'll be great to see how Daniels plays the relationships as the series moves forward.

Bummer Points: Occassionally, Daniels would get stuck on a descriptive phrase that became annoying to read over and over. For example, in a chapter when Pepper's being followed, she makes a comment no less than three times about how the people behind her weren't the Prize Patrol. While phrase that like was funny once, the book could have used a sharper editing eye in a few places like that to make sure that ideas didn't get overused.

Word Nerd Recommendation: Janet Evanovich fans for sure would love Pepper Martin as well as reader who like a well-crafted mystery. The story, as I described to my dad, is a "girl book" given the chick lit feel with Pepper's interest in the two male characters. If you're a girl looking for a fun read, you can't go wrong here.
Posted by Bethany K. Warner at 7:13 AM