In which Word Nerd becomes a horror writer

Last week, Neil Gaiman was in town to deliver a big lecture through an Indianapolis-Marion County Public Library program.

Not one to pass up such an opportunity to hear a famous writer speak, Word Nerd contacted one of her writers group members to see about a group outing. At which point, he tells her, the Indiana Horror Writers are sitting down with Neil Gaiman for about 30 minutes before the event.
"Can I be a horror writer today?" Word Nerd asks.
To be fair, Word Nerd did attend their conference last year and is attending their conference again this year. She's even written things in the past involving zombies.
In short, Word Nerd got to hang with the horror writers.
Oh, and Neil Gaiman too. 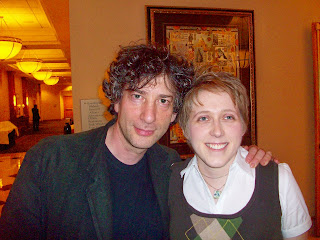