Bouchercon being a national event, draws attendees from all over. Today's author-- Vicki Lane -- will leave the beauty of the Blue Ridge Mountains in October to come to Indianapolis. And today she reflects on her earlier experiences with Bouchercon. 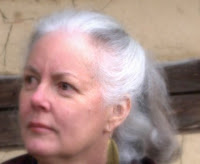 My First Bouchercon, by Vicki Lane
“You’ll want to sign up for Bouchercon . . .”
“What’s Bouchercon?”
I came to writing late – I was 62 when my first book was published. And though I’d read mysteries all my life, beginning, of course, with Nancy Drew, I’d never known about mystery conferences. But after being told by Those Who Knew that this was important, I signed up for Bouchercon 2005 – in Chicago.
A big city. Yikes. Taxis. Tall buildings. Maybe even gangsters. I am so very much not a big city sort of a person. Since 1975 I’ve lived on a farm in the mountains of North Carolina and the idea of Chicago kind of scared me. But I went and it was glorious.
The thriller writer John Ramsey Miller (whom I’d met earlier at a local book fair) and his wife– aware of how lost this country mouse was feeling – took me under their wing and whisked me off to the Bantam Dell cocktail party, to the Art Museum, out to dinner.
For the first time I met in person my editor, the redoubtable Kate Miciak who shaped the careers of legends like Sue Grafton and Elizabeth George . . . saw my first Blackberry . . . and at the Bantam Dell cocktail party goggled at biggies like Lee Child, Laurie King, Karin Slaughter . . .
I was on a panel of other newbies – it went by in a pleasant blur – and I went to as many other presentations as I could. I think the most memorable was watching Jonathon King interview Harlan Coben -- the funniest and best interview I’ve ever heard. I bought some Coben books, stood in line in the bookroom to get them signed . . . and lost my heart to him when he wrote in one “You rock!” (I know, I know, -- he says that to everyone. But just for the moment it felt . . . kind of special.)
Since then I’ve been to two more Bcons, feeling a little less uneasy each time, a little more as if I belong. And this time – oh this time – my fourth book, In a Dark Season, is an Anthony Nominee for Best Paperback Original! Maybe I really do belong.
That first Bouchercon changed my mind about big cities and opened up a whole new world to me. I’m getting better at talking to people I don’t know, introducing myself to strangers, walking up to authors I’ve admired for years and telling them so. It’s what these cons are for – readers and writers connecting with one another -- and I’m delighted I’ll be there, wearing both hats.
I’ll be wearing my Southern writer’s hat (a tractor cap?) for my panel assignment on Thursday, at 1:30. The panel is “SOUTHERN VOICES: What’s special about Southern mysteries? “ Our moderator, the always funny Cathy Pickens , will attempt to keep T. Lynn Ocean, A. Scott Pearson, Deborah Sharp, and me in line.
You all come say hi, okay?
For more about Vicki Lane, check out her website and her blog.
Posted by Bethany K. Warner at 4:42 AM

Why sugar, you know I'll be there!
(was that southern enough to be in keeping with your panel?)

Vickie - you belong. Make no mistake, and banish the doubts. You DO rock!

See you in Indy!

Young un, that was just about perfect! Thanks for stoppin' by!

I was born and raised in Chicago, worked right downtown and was more then glad to leave, so don't blame you for your fears years back, BUT it sounds like a wonderful, very interesting event you have taken part in ... wish I could be there to hear the discussions, but I'll just have to wait for your blog posts upon your return. Enjoy!

Vicki your mysteries are 5 star! Of course you belong! I so hope Dark Season wins!! :)

here I am Vicky, probably a bit too late for not letting you feel like your lovely wallflower. I thought your first picture showed a magnolia. aren't they in flower at your place at the moment? here in southwest-ireland there are a few of those delicates trees from the Southern US and every blossom is worth a celebration!
I still have no idea what a Bouchercon really is. could it be comparable to the international book fair in Frankfurt (which I know)? as I am "only" a reference book author I don't need to good to such places.

Pat, as it turned out I loved Chicago -- felt quite safe and the people I met on the street were charming. I was in the high rent district, near the lake and the Art Museum -- I know it's not all that nice. But it was a good lesson to me about preconceptions.

Thank you, Carol! I wish you could be there!

Eliane, how sweet of you to follow me over here! Bouchercon is a convention of about 1500 readers and writers of crime fiction. It's held in a different US city every year in October.

The plant you asked about is an echeveria, native to the Americas, also called a Hen and Chickens.