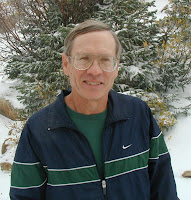 This week's guest blogger -- Mike Befeler -- shows us that murder and mysteries aren't just for the young...

I want to thank Bethany for inviting me to participate in this guest blog in preparation for the Bouchercon conference in October. I write the Paul Jacobson Geezer-lit Mystery series which includes two published novels, Retirement Homes Are Murder and Living With Your Kids Is Murder.

I write about older characters—what I refer to as POWs, not “prisoners of war” but “persons of wisdom.” This is the fastest growing part of our populations and rather than ignoring older people, I encourage everyone to find the wisdom that exists within the ranks of our older citizens.

My novels were inspired by people I met when my mom and stepfather lived in a retirement home. My main character, Paul Jacobson, is a crotchety gentleman in his mid-eighties who suffers from short-term memory loss. Even though he can’t remember yesterday, he becomes an amateur sleuth and has a romance with a young chick in her seventies.

Paul is a crime magnet as well as being an older-chick magnet and gets in all sorts of trouble with the law, first in Hawaii and then in Colorado. With the assistance of his granddaughter, Jennifer, he solves a number of mysteries, and after first being a suspect, helps the police bring the perpetrators to justice.

Under Paul’s gruff exterior beats a heart of gold. He overcomes the effects of his short-term memory loss and continues to lead a successful and exciting life.

After retiring from the computer data storage industry in 2007, I’m now writing full time and also volunteering in organizations helping seniors. In Boulder County, Colorado, where I live, I’m on a Countywide Leadership Council and on the Aging Advisory Council that reviews funding requests from organizations providing services to seniors. I also attended a citizens’ police academy and volunteer for police training role-playing exercises. I have been giving a presentation at retirement communities and service organizations titled, “Aging and Other Minor Inconveniences,” that promotes a positive image of aging through humor and examples from my writing.

Writing about older characters presents the challenge of overcoming typical stereotypes. I enjoy portraying quirky characters who provide models for what we all can become as we grow older—vital, involved, humorous, alive people.

As Paul says, he may have been dealt a crapola hand that includes a memory that resets like the clock on a microwave when the power goes out, but he still gets up every morning to live his life to the fullest.

Mike Befeler Author of Retirement Homes Are Murder and Living With Your Kids Is Murder "It's hard to beat a team that includes a wisecracking old fart and a straight-talking young sprout, and Befeler's second geezer-lit entry delivers"-Kirkus Review