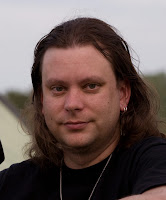 Say hello today to Sean Munger and stick around after his blog to find out about how you can snag some copies of his Giamotti books.

Why I Will Never Have A Life Without Giamotti

One of the great—and terrible—things about writing is that what you write never really goes away. Just this month (June 2010) the new ebook version of my science fiction novel Life Without Giamotti has been released, marking another milestone on what I can hardly believe has been a twenty year odyssey with these stories and their eponymous main character.

Life Without Giamotti was first published in paperback form by Buffalo Fetus Productions in 2006, but the story and the character of Giamotti have been around for much longer than that. In high school I had the curious idea for a character, a sort of darkly intelligent and devious biker who becomes sentient, realizes he is a fictional character and sets about trying to bring himself out of his novel and into reality. From the beginning the character of Steven Giamotti seemed different than any other character I’d created. He is not just devious; he has a total lack of human emotions and the capacity for empathy, making him capable of true evil. He isn’t just arrogant and ambitious, he’s megalomaniacal. And I quickly learned over the various early drafts throughout the 1990s that he had his sights set a lot higher than I appreciated at first. Becoming a real person in the real world was only a first step. Ultimately he wanted to become God: omniscient, immortal, and all-powerful.

The story of how Giamotti sets out to do exactly that finally jelled in Life Without Giamotti, but there are so many facets to his journey that the leftovers from the sixteen years of labor on the first book quickly became the two sequels, All Giamotti’s Children (published in 2008) and Giamotti in Winter (published in 2009). Now, after three novels, twenty years, and Giamotti’s adventures across time and space ranging from the American Revolution to the swanky nightclubs of Manhattan in the 1950s, it feels like the whole thing is starting over again with the publication of the ebooks. The first ebook is already out, available from Lulu (http://www.lulu.com/product/ebook/life-without-giamotti/11179131) and the others will be released in digital format soon.

Buffalo Fetus Productions, working through the web-based printer Lulu, has proven to be a terrific option for the publication of the Giamotti books. The publishing business has changed radically in the last ten years, with traditional brick-and-mortar publishing houses struggling to adapt to a new environment largely defined by technology and with multiple new ways to access books. Life Without Giamotti is a very unusual book with a non-linear narrative, complex characters that drift in and out of the plot at unpredictable times, and deals with a lot of mind-bending metaphysical concepts that go pretty far beyond traditional science fiction tropes—not the kind of stuff traditional publishers are likely to take a chance on. The rise of technology-based book presses like Lulu have suddenly made it possible for tiny publishers to capture niche markets, and that makes all the difference with non-traditional books like the Giamotti trilogy. I never set out to be on the New York Times’ bestseller list, but I’m amazed that the story of Life Without Giamotti has found its way from my laptop in suburban Oregon to bookshelves across the Americas, in Norway, in Germany and all places in between. The books have been read at both poles of the Earth: I once got an email from someone reading Life Without Giamotti at a research outpost in Greenland, and a copy of All Giamotti’s Children can be found in the library at McMurdo Station in Antarctica. All in all, that’s pretty satisfying.

I proclaimed myself “done” with Giamotti when I finished All Giamotti’s Children in 2009. A year later I wonder who I was kidding. Even as I move on to other projects—my new book, The Valley of Forever, which is not part of the Giamotti saga, will be released sometime later this year—I know that Giamotti, being omniscient and all-powerful as he is, will never leave me. I wrote him to be immortal, and for better or for worse, he probably is. With the ebook versions giving him another lease on life, I’m sure he’ll be around for quite some time to come.

Honestly? Giamotti has stuck with me. From the moment I finished reading this novel, I knew I had a lot of thinking to do.

Congratulations on an excellent novel, Sean!

Characters that I've read who have stuck with me:

* The Mock Turtle from Lewis Carroll's Alice books.
* Hercule Poirot.
* Marvin the Paranoid Android probably should be in this list too. I know he'd be thrilled to hear it.

Generally, it's not characters that stick with me when I read. But I'm not sure what does. Mostly because I haven't read enough fiction (or anything else) in recent years. The internet is destroying me. :-/

are the three that come to mind today.

Cathy and Heathcliffe from 'Wuthering heights' have seared into my mind since I read the book aged 14. The two despicable characters that share selfish passion and a soul. Every (straight)woman has a secret desire for a Heathcliffe and to be in part a Cathy. Eternal and unforgetable charcters.

Possibly a little commonplace, but Boromir from Fellowship of the Ring. I really enjoyed that he was written to showcase some of the worst traits of man. Greed, lust for power and total lack of faith in the cause. Though his character shifted somewhat by the end, I enjoyed the time he spent as an antihero.

The winners of the contest are SPenney (who has won the full set) and D (who's won the ebook version of Life Without Giamotti). Congrats!

Would both of you please email me at wraith@giamotti.com and we'll get you your prizes!