There are few things in life that make Word Nerd wish she was 16 or 17 years old again.

As a whole, those were tough years of high school with a full slate of AP classes, college applications, high school newspaper staff, church youth group, drama practice and boys who were oblivious to the fact that she would have enjoyed doing something with them other than studying. 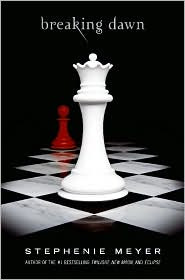 However, for once, the midnight release tonight of "Breaking Dawn" makes Word Nerd wish she was about a decade younger than she is.
Like gobs of other people, Word Nerd can not wait to find out what happens in this book to end the series. The cover art is so darn cool. And getting to read more about Edward Cullen... well, here's where Word Nerd needs to be younger to feel like she can be this excited about a fictional teenage character. (Or, do his years as a vampire mean he's really older?)
If Word Nerd was 17, she might contemplate going to the midnight release party. As someone older than 17, it seems... what's the word here... inappropriate? Yes, she went to the midnight Harry Potter #7 release party, but she was in the company of cape-wearing, wand-waving children. (She was only encouraging them by wearing her robes...ahem.)
Back to "Breaking Dawn," she's got the book on hold at the Indianapolis library, number 21 of as of 8:45 this morning, 261 hold requests. The library's got some 40 copies or so listed as for purchase, so she's pretty hopeful she'll get the book either tomorrow or Sunday. Not matter when she gets it, she'll probably drop whatever she's doing and read it straight through, staying up late to finish, etc.
Sigh. It could be a good weekend. Or a bad one, depending on the ending.
Also in book news today, J.K. Rowling will have another book on the shelves in time for Christmas -- The Tales of Beedle the Bard.

A bit more cynical in her old age, Word Nerd was waiting for this to happen -- all the Harry Potter ancillary volumes and spin-offs and such. That said, Beedle will likely go on her Christmas wish list.
Posted by Bethany K. Warner at 8:39 AM