Book Banter -- Pirates of the Levant 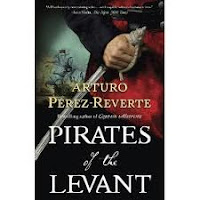 Title: Pirates of the Levant (Captain Alatriste bk. 6)
Author: Arturo Perez-Reverte
Genre: Historical fiction
Length: 362 pages
Plot Basics: The enigmatic Captain Alatriste and his squire (and the story's narrator) Inigo are serving on a Spanish ship in the Mediterranean Sea. They are trying to capture what bounty they can from English or Turkish ships and live to tell about it. Inigo -- now having been through many adventures with the Captain and on the verge of adulthood -- is beginning to try out his independence and rebellion against his protector. When the ship they are on falls into a Turkish trap, Inigo and Alatriste must fight with all they have.
Banter Points: Since the story follows the chronological exploits of Inigo and Alatriste, it's neat to see Inigo start to assert himself (though not well pr with very good results). Inigo still is dragging the reader along in his unrequited love for Angelica Alquezar and that thread is, at this point, what's keeping the series holding together.
Bummer Points: Not my favorite of the Alatriste books. I had high hopes when the book opened and they were on a Spanish galley in the middle of a battle. But the book ends up in more battles and less political intrigue.
Word Nerd Recommendation: I hate to admit that I'm getting tired of Alatriste, but I am. The series started so well with Captain Alatriste and then Purity of Blood but the later ones just haven't matched the fun of those first few. If you're an Alatriste fan, sticking with it is probably good because Inigo hints a little at the future which could be some better stories, but on its own, Pirates isn't worth the whole series.
Posted by Bethany K. Warner at 6:20 AM