Web Comics (and a giveaway!)

When I was a kid, I loved Sundays and the colored funny pages. I always like to read "Peanuts" and "Garfield" and later "Calvin and Hobbes" and "The Far Side."

Now, when I look at the funny papers, I don't get into them that much because I think my tastes have grown up and moved from newsprint to online.

There's a huge market of web comics that span a huge range of artistic ability as well as storytelling that raises from them to comic strips to online graphic novels.

Today -- I want to highlight a few of the webcomics that I check on, from sporadically to being a faithful reader.

Xkcd: The art here is primitative, stick figures mainly, but the jokes are smart. In fact, you have to know alot about math, history, pyschology and more to appreciate many of the jokes. It's great that I can put my liberal arts education to good use somewhere. Where else do all those hours of studying for general psych, statistics, and number systems (ok, that was high school math, truth to tell) actually help out?

This is another good recent one about advertising, icons, logo and Guy Fawkes. (don't know about Guy Fawkes, go watch V for Vendetta for a action plot that at least has a little bit of historical accuracy.) 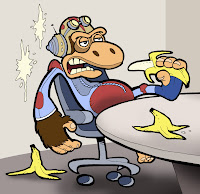 Roger Cosmonkey: You've got to be on Twitter to read Roger Cosmonkey written by @RealCoryEdwards. When I was in college, interning at the Washington Times, I got to interview Cory for a culture page story about the rise of "clean comedy." (Google is failing me because I can't find a link to the story... never mind it was a decade ago...) This past spring, he launched the Twitter-only Roger Cosmonkey series about the space-faring simian's adventures. According to the rogercosmonkey website, more series are planned.

(A moment of full disclosure before I go on -- my top two webcomics that I read are written by my friends. Is that why they are my favorites? Maybe. On the other hand, I think I'm wildly lucky to just have super-talented friends.) 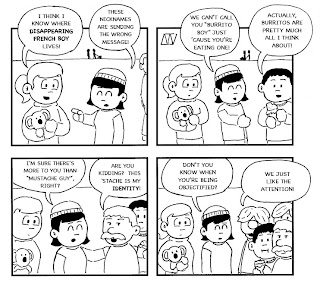 Wingmen: This comic has nothing to do with space or flying. Nope, it's the other kind of "wingman." For years now, Adam T. Williams (@wingmen_comic) has chronicled the dating (mis)adventures of his cast of characters. The wingmen have been in black and white, guested as puppets, and now have evolved to color.

Anybody frustrated with dating in the 21st century and the hidden rules, mores and expections will relate to the humorous travails of the wingmen.

This particular panel is a guest plot line from yours truly here at Word Nerd. A caveat -- there are far better ones that she had no hand in, proving that she is not a comedienne.

The Brothers Grant: This is my Tuesday guilty pleasure. Apparently, author Ginger (@LawofGar) and I went to school together, but we didn't really know each other on campus. Thanks to a mutual friend organizing a group of gamers, Ginger and I were suddenly role-playing together, our characters fighting off guys with burning hands and Bigfoot and a crazy man with a rocket launcher in a tree house. Her character, Sam, was in the game as a development ground for The Brothers Grant. TGB is still young and the story is very much just developing, but tee-hee!

And now the giveaway part!
Adam from Wingmen and Ginger at TGB are offering up some comic-related swag!
So, to win, let us know what webcomic you enjoy! Or if you aren't a web comic reader, what comic strip in the newspaper has been your favorite. Contest open to all, even if you've won something from Word Nerd before. Entry deadline: Midnight (EST), Oct 19, 2011.
Good luck!
Posted by Bethany K. Warner at 6:27 AM

I still thoroughly enjoy Calvin and Hobbes. I have the complete 3 volume set and will pull it out from time to time to refresh myself on it.

I'm a Far Side fan. Its quirky humor just left me in stitches. I went into mourning when it stopped.

Webcomics! Brothers Grant and xkcd are great, of course. I also follow Little Guardians and, when I'm feeling really different, Dinosaur Comics and The System. I read Weregeek, Girl Genius, Questionable Content, and Penny Arcade on occasion, as well. I used to follow more webcomics but got horribly busy for a while and lost track of a lot of them.

I actually have an idea for a webcomic of my own but haven't been brave enough to start it yet. :-)