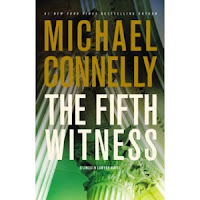 Genre: legal drama
Plot Basics: Defense attorney Mickey Haller has turned to defending foreclosure victims as the economy tanked around him and many criminal clients can no longer afford him. One foreclosure victim -- Lisa Trammel -- ends up the target of a murder investigation in the death of a banker in charge of the bank fight to take her house. Now Haller's back defending a client against the powerful economic forces of the day and he puts himself in danger to follow the case to the unexpected end.

Banter Points: Reaching this point has been a long time coming -- I have now read every fiction book Michael Connelly has published to date and there's a huge sense of accomplishment in getting here.

I don't love the Haller books as much as the Bosch books (or as much as the Poet) but, this one is probably my favorite of the Haller novels. The courtroom drama is sort of predictable but the evidence is not. The story is neatly tied into current events with the housing collapse without feeling trite.

Bummer Points: Mickey has an about-face as a character that's a little unbelievable at the end. While the whole Haller story has been showing how tough things are for him as a defense attorney, this proposed switch is just a little too much since most people really can't/don't make such radical changes to their lives.


Word Nerd Recommendation: If you're ready for the long-haul, dig into Michael Connelly's who catalog of books. You won't be disappointed.
Posted by Bethany K. Warner at 7:30 AM