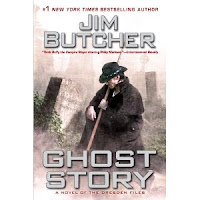 Title: Ghost Story (Dresden Files bk. 13)
Author: Jim Butcher
Genre: urban fantasy
Length: 477 pages
Where Word Nerd's Copy Came From: Indianapolis-Marion County Public Library
Plot Basics: Chicago's only professional wizard, Harry Dresden, can't even die right. After a bullet sends him, dying, into the frigid waters of Lake Michigan, Chicago and the rest of the worlds start to experience a huge power vacuum after the destruction of the Red Court Vampires. Instead of finally getting to rest, Harry is sent back to solve his own murder. But being a ghost, Harry doesn't have access to his magic that he's used for so many years to protect those he cares about and defend his city. And Harry quickly learns that he's not the only ghost on the prowl in the Chicago, meaning that he's got to stay alive (so to speak) one last time to avert disaster for his friends.


Banter Points: I didn't love this book until page 444. Seriously. That's when I sat up, gasping aloud, scaring my cats who'd been snoozing as I read the second half of the book. And suddenly the whole book got oodles better. I didn't not like Ghost Story until then, but I think I'd set the bar impossibly high for Butcher to meet my expectations. And on page 444, he delivered, and then the next 30 pages kept me reading on the edge of my seat.

The whole novel felt a lot more like the early Dresden files, the constant barrage of fight scenes (or maybe that's because I've been working through the early stories again). But, of course, being book 13, it also tied into a lot of the early stories. (Which, to my chagrin, I couldn't remember all the details of....)


It was also nice to see the other characters react to Harry's death. They were drastically affected by the lack of his presence in good and bad ways.

Bummer Points: I think Butcher is close to the line of being self-indulgent with all the sci-fi and comic book references. Harry's a smart mouth -- somethings don't change when he's dead -- but this Ghost Story had too many, especially since the plot sort of hangs on one of them.

The lack of Thomas was also a big bummer. The little chapter with him felt like Butcher was forced to put that in there to satisfy an editor (or his fans), but it's didn't really do it for me. I think I would have rather left Thomas and seen another short Thomas novella like "Backup" about what he's been up to lately.


Word Nerd Recommendation: If you haven't read Dresden Files, what are you waiting for? Everyone I've recommended this series has liked it. You will too.
Posted by Bethany K. Warner at 8:08 AM

It's so funny that you mentioned that about Thomas. I missed him during the book and was SO HAPPY to see him, even if just a little at the end. What I missed what the White Council and Ebenezer. WTF? And, as always, Michael Carpenter. I do love Michael.

I liked the book very much, but I did like it that much more at the end. This is the first book that I've read first, though, normally I listen to them first. Sometimes, I only listen but others (like Changes) I did go back and read in print. This was my first print first (though I have the audio on hold) so we'll see how it stands up on audio. Overall, though, I liked it a whole heck of a lot.

Yes, to the SF references, but I get them all so maybe I don't care as much. They make me smile or laugh or giggle or smirk.