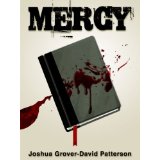 Title: Mercy
Author: Joshua Grover-David Patterson
Genre: sci-fi
Length: 408 pages
Where Bethany's copy came from: Advanced reader copy
Plot Basics: Georgina Fulci is returning from a mission trip to Ethopia when the plane she's on crashes. Georgina is one of a handful of survivors who wash up on a deserted island and must try to survive. What they are loathe the admit is the reason the plane went down; it appears to be a zombie attack, which is more unbelievable than living through a plane crash. Georgina begins to keep a journal of her survival, recording her own fears and her hope to get back home to her daughter, Mercy, and along the way, records the stories of her companions, comedian Antony, vigilante Leroy, Sharon a washed-up flight attendant and 11-year-old Tracy. Through zombie attacks, pirates and desperate conditions, Georgina finds new meaning to family and the capacity to love throughout trial.

Banter Points: Patterson has taken the zombie-pocalypse story in a fresh new direction, infusing hope and heart into a format that often only sees heart in the form of gore. Mercy is a cross between "Lost" and "Dear Mr. Henshaw" of the best kind. The epistolary format lets the reader experience the action in it's emotions, instead of action-movie sequences. The zombies are present, but not truly the deep fear of the characters but the catalysts for them to wrestle with the deep truths about who they are. This is what sci-fi should be; normal people operating in extraordinary circumstances, relying on what makes us human to prevail.

Bummer Points: At the end, I think I was hoping for one last giant zombie-battle scene. There is a pretty impressive action scene near the end, but then the action almost crawls to the end after that instead of racing toward the finish. The end remains ultimately satisfying, but it lacks the Buffy-defeats-the-big-bad feeling of victory.

Word Nerd Recommendation: Go to Amazon. Download this one. Read it, even if you don't think you like zombie novels.
Posted by Bethany K. Warner at 7:40 AM