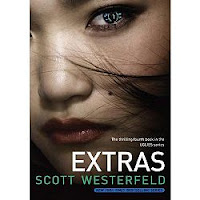 Plot Basics: It's several years since Tally Youngblood burst the bubblehead society and brought the mind-rain. Have things gotten better though? Now fame is decided by face rank and how many people are reading your feeds. For Aya Fuse, a face rank of 451,369 isn't good enough. She's out to find a story that will raise her from obsurity into the popularity. The story will do anything to protect themselves and keep the Sly Girls an urban legend.

Banter Points: I loved that Tally Youngblood made an appearance halfway through the story. Aya's own beginnings are similar enough, in desire anyway, to Tally's that I'm surprised that one of the Cutters didn't recognize it. Instead, the story Aya kicks is nervous-making for Tally and the Cutters. What new sort of hell has humanity thought up?

The slang in this title is fab too. Instead of making-up words, Westerfeld takes normal words and combines them in a way that is easy to follow, but sounds foreign. Dizzy-making stories are kicked to feeds that keep people from truth-slanting.

The series continues challenge the rule-makers and what is considered normal. This is a great title for teens to read. Parents should check them out too.

Bummer Points: None, really. This is a fabulous series.

Stacie's Recommendation: Start with Uglies, then Pretties, the Specials, before picking this one up.
Posted by Stacie Penney at 6:18 AM