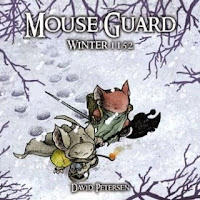 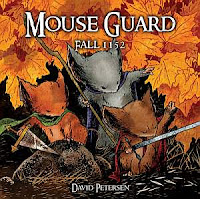 Title: Mouse Guard Fall 1152 and Mouse Guard Winter 1152
Author: David Peterson
Length: 192 pages (each)
Genre: graphic novel
Plot Basics: In the Mouse Territories, the Mouse Guard are the protectors of all, guarding caravans and keeping mice-kind safe from all threats (owls, snakes, etc.) Three of the Guards' best -- Kenzie, Saxon and young Lieam -- investigate the death of a merchant and, in process, discover the treasonous plot to overthrow Lockhaven. To stop the traitorous mice, the guards also rediscover a famous mouse legend -- The Black Axe. Stopping the treachery takes the mice -- especially hot-headed Saxon -- into great danger. And with one threat stopped, the coming of winter brings a new battle just to survive. 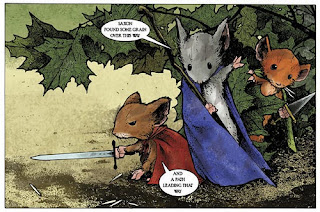 Banter Points: Mouse Guard is what Brian Jacques' Redwall books would be if they were really written for grown-ups. While the idea of mice with swords and capes sounds cutesy, Peterson tells the story and does the art like any other violent comic -- there's blood and violence and some amazing panels for the fights. The art is gorgeous and it's neat to see the small mice fight off enemies that are so much bigger than they are. 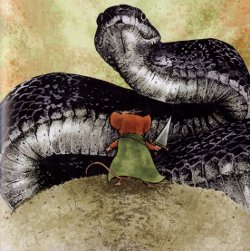 Bummer Points: The story isn't actually all that good and the characterization just gets lost among all the fight scenes. The mice have so much potential -- hot-headed Saxon, young and gifted Lieam, Sadie who patrolled the coast alone for so long and now is back in civilization with the other Guard -- but it gets kind of lost in the battles. Additionally, even the big plot, the treason and the effects of winter, get swept away in the art and then suddenly the book is done and, as a reader, I had to wonder if I missed something.

Word Nerd Recommendation: I'd pick up the books for the art. When the third Mouse Guard is out, I'll read it and just fill in some of the story blanks in my head.
Posted by Bethany K. Warner at 7:43 AM