Influence of the Fictional

Forget the 100 best photographs of the century. Or top 10 lists of all kinds.

A new list is out -- the 100 most influential people who never lived.

USAToday has a short story about the folks who put the list together here.

You can also view the entire ranking here.

The top spot? Don't get your hopes up... it's the Marlboro Man. In Word Nerd's mind, there's something wrong when a character like that gets a billing 84 spots above, oh, you know, a hero-type, like Luke Skywalker (the Jedi ranks at 85.) Word Nerd doesn't know who she'd put in the top spot, but she has a hunch it'd be somebody, well, less smoky. 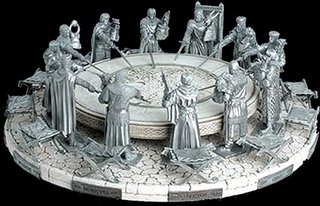 King Arthur comes in at number 3, which makes Word Nerd very happy. That one could also be open to some level of debate about whether he's really fictional because of speculation about if there was ever a war leader/tribal chief/guy named Arthur in Britain who did something cool at some point in history.

Where are Arthur Dent and/or Ford Prefect? That's what I wanna know. :)