Breaking out the red pens* 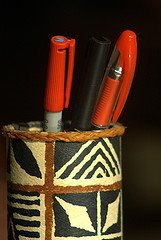 *And the purple and the green ones too.

Word Nerd is gearing up for some editing. That's right. Her novel.

Word Nerd has a trip on an airplane coming up and she's planning to use the confined time to read, only this time, instead of reading somebody's else, she's going to read her own.

It's been a couple weeks now since she finished the rough draft. In the interim, it's been sitting in a 3-ring binder on a shelf. Word Nerd feels only slight twinges of guilt for this.

Revision has always been one of the steps in the writing process. Word Nerd thinks "waiting time" should be one too. Maybe weeks is on the side of "vacation" rather than "waiting time," but the purpose is the same -- to come back to the manuscript with fresh eyes.

Think about it. No matter what writing it is, you (as the writer) are engrossed in it while you're writing it. In Word Nerd's case, that was 6 months of spending lots of quality time with Ainsley Doran (her protagonist), Westin Mackay (Ainsley's new squeeze), Gilles Brossard (a French inspector), Ibsen Volkart (the bad guy) and others. Not "seeing" them for a few weeks will hopefully make problems in the story stand out more clearly. Word Nerd knows the problems are there, but not being steeped in the story every day should help new solutions present themselves.

Getting through the manuscript once is part of Word Nerd's writing goal for September. After that, a revised goal for the rest of the month will be figured out.
Posted by Bethany K. Warner at 9:20 AM