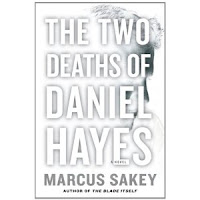 Title: The Two Deaths of Daniel Hayes
Author: Marcus Sakey
Genre: mystery/thriller
Length: ~400 pages
Where Word Nerd's Copy Came From: Indianapolis-Marion County Public Library
Plot Basics: A man wakes up on a deserted New England beach. He doesn't remember who he is,  but it's clear that he's barely survived a suicide attempt. He tries to piece his life back together, wondering what would have compelled him to such ends. His search takes him cross-country, searching after a woman he sees on TV and straight into running for his life and stumbling into truths that he once knew but now, can't remember.

Banter Points: When I saw the premise of this book, I thought, "Marcus is a brave man" trying the whole amnesia thing. After Robert Ludlum had Jason Bourne getting amnesia and forgetting he was a trained government agent with such success, it felt like one of those plot devices that could never really be wielded by anyone else without coming across as a lame copy.

Leave it to Marcus Sakey to make it work. Daniel's amnesia works to drive the plot but doesn't become just a trite device. The twists never stop coming in another fast-paced thriller from a writer who's carved himself a great niche of putting normal people characters through their nightmares.

Bummer Points: This isn't about the writing, really, but I wish I'd been able to read the book in one sitting. Picking it up and putting it down made the action feel jerky instead of the smooth flow that it really is.

Word Nerd Recommendation: If you like those of "what if" something happened to a character kind of like me, Sakey's books should definitely be on your shelves.
Posted by Bethany K. Warner at 7:40 AM