It's been awhile since the editing team was featured here, so, I thought it time. 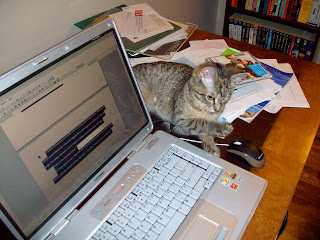 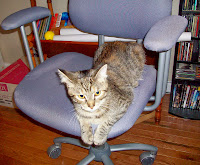 Co-editor Mina is now 9 months old and more than double the size she was when she first joined the team. She's now a full part of the editing/writing every morning. Most often, this means a few laps around the desk and then trying to chew on the pen I've got handy. Lately, she's also been batting at the moving cursor/mouse pointer on the screen which, while hilarious, makes it hard to see what I'm typing.

Co-editor Gatsby is generally content to hang out and sit on whatever pages I've got nearby. He also gets annoyed with Mina, as any older brother should. They both regularly try to sit on the laptop (I get the confusion... lap, laptop... it all sounds the same to a cat, I'm sure.) Gat is still doing well for a cat of his age. That age is undetermined really, but he could be anywhere from about 12 to 15, most likely, and could be even older than that. Dubious past and all...

I'm just hoping that their "help" is really improving the book. Maybe all the teeth marks on my pens and chewed page corners will be a good reminder that an editor/agent could chew up the book the same way if I don't put the time and effort into first.
Posted by Bethany K. Warner at 8:19 AM