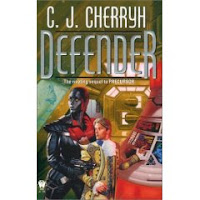 Title: Defender
Author: C.J. Cherryh
Length: 314 pages
Genre: sci-fi
Plot Basics: SPOILER ALERT -- being book five out of a nine-book/three-trilogy cycle, it's hard to do this and not give something away at this point.

Bren Cameron, translator and diplomat between the humans on the planet, the humans on the space station and the atevi is called back to the planet suddenly from the space station to attend a memorial service from the already-dead father of the current atevi ruler. The trip makes no sense to Bren, who's sent back to the station right after the ceremony. The trip, he discovers, soon enough, was perhaps nothing but a bit of political legerdemain to attract attention away from the station and the spaceship. The spaceship that's leaving, with Bren on it, to retrieve crew members left at another station... if he can smooth out political disputes between the ship crew, station crew and the planet.
Banter Points: This book was definitely better than the fourth book in the series. Book four (Precursor) spent a lot of time catching the reader up on the first three books and not enough on new plot. This book upped the stakes much higher much earlier on in the story.
Bummer Points: A little more action could be good. LOTS of talking to sort things out in this book. The major action seemed to get bogged down for a while in dialogue.
Word Nerd recommendation: So far, the first trilogy is better overall than the second trilogy. Sci-fi fans will like it, but if this isn't really your preferred genre, you might want to steer clear.
Posted by Bethany K. Warner at 8:57 AM